Origin of the Chapter of the Twenty

In the late 1780’s the political unrest in Pennsylvania caused many of the early settlers there to look north to Canada. The promise of freedom of religion, cheap land, and a more secure future for coming generations, led many pioneer families to start the long journey north. The first land scouts that came north in the mid 1700’s looked for large tracks of land that would accommodate the Mennonite settlers with many sons. The Niagara Peninsula with its fertile soil and a good supply of fresh water was an ideal combination. One of the most chosen routes north brought them to a crossing point called Black Rock, a place still prominent at the mouth of the Niagara River. The point can still be seen just north of the Peace Bridge at the mouth of the Erie Canal. The crossing there connected to a stage coach trail from Chippewa to Ancaster along the south side of the escarpment and the south side of the peninsula. There were many fresh water courses flowing north from above the Escarpment to Lake Ontario and these creeks were soon used as mile measurements from the Niagara River west. Many of these courses are still referred to today as The Four Mile, The Six Mile, The Ten, The Twelve, The Fifteen, Sixteen, Eighteen, The Twenty, The Thirty, and The Fifty.

The largest of these creeks is The Twenty and the Mennonite settlers were quick to recognize the large falls at the edge of the escarpment. This provided a valuable source of power for a grist mill, a saw mill and many of the support industries that soon became a part of a fast growing community. The fertile land around the harbour produced large quantities of wheat for flour and many varieties of fruit were soon to be grown commercially. During the early 1800’s there was a large Mennonite populace in the area. After hundreds of years of fleeing from persecution they had finally found their Garden of Eden. 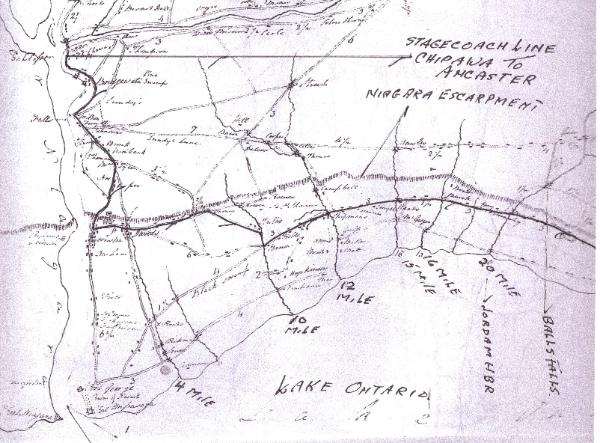