You are here: Home / Settlement Stories / Chapter of the Twenty / The Vineland Cemetery

The Vineland Cemetery had its beginning in 1798. As the Pennsylvania German settlers moved north to Upper Canada. Many Mennonite families settled in the area around the”Twenty Mile Creek” later a part of Lincoln County. The main trail west which later became the King’s Highway #8 made the Twenty area a natural stop over to rest and regroup after the hard journey north. One of those families having lost a child along the way and made a burial between Rittenhouse and Martin Road along what is now Hwy #8. This was on the property of Jacob Moyer, the first Mennonite Bishop of Upper Canada. The original one acre site was surrounded by a stone wall (1833) and by 1915 there were burials outside the wall. As the community grew, the need for more land became apparent and In the early 1900’s Moses F. Rittenhouse a lumberman from Chicago, returned to his Mennonite birthplace. 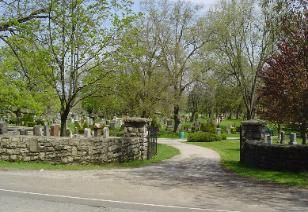 His strong desire to be buried near his ancestors led him to give a further three acres of land and to set up a trust in 1915 to insure the future of the Cemetery in the community. The Trust was very specific about the care and maintenance of the original one acre Mennonite Burial ground and the original trust still directs the maintainance of the Cemetery property today. In 2001, the board of management began a schedule of much needed repairs. The one acre burial site was re-sodded and broken headstones were repaired. 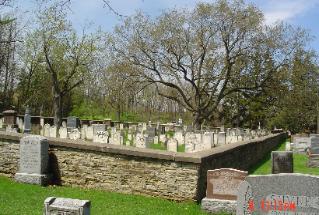 One hundred year old trees on the site were trimmed and the (1833) stone wall along the highway side which was badly deteriorated was replaced with new lime stone. The remaining three walls were repaired and re-pointed. A heritage designation was dedicated on the one acre site (1798) inside the wall and at the headstone site in the main cemetery of M.F. Rittenhouse. The Cemetery still serves a large Mennonite community.